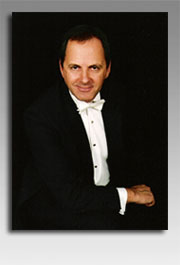 At the beginning of his career most of Rob's compositional activity was songwriting but compositions for wind and brass started to be produced sporadically during his time as a Director of Music.  He is largely self-taught, although he had some composition lessons with Brian Kelly (at college) and Philip Sparke.

He developed a passion for the guitar while stationed in Bahrain during the first Gulf War and went on to write over 80 pieces for the instrument.  The guitar provided the creative stimulus for other composition and the RAF provided the demand.  He was in the privileged position of being able to write for musicians that he knew, and also for particular venues. He wrote music for performance in Westminster Abbey and St Paul’s Cathedral as well as all of the UKs major concert venues.

His compositions are now regularly performed around the world.  As in his arrangements, his compositions display wide stylistic diversity.  He does not write atonally but likes to take his harmonic and rhythmic language close to the edge at times.  He writes mainly for wind band and brass band but his catalogue shows a diversity ranging from solo guitar to orchestra and clarinet choir to big band.